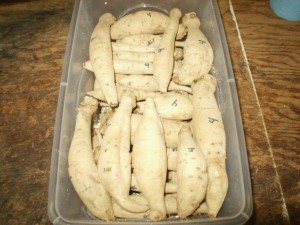 Over the years of growing dahlias we have wintered over our tubers in many ways. Some ways did not work so well and some have worked great. You can get a lot of advice on storing tubers from dahlia growers, we will share with you how we are doing it now. The way we store our tubers has evolved to this system and we like the results.
Good tuber storage starts with good plant care while the dahlias are still growing. It seems that dahlias that have been given high doses of nitrogen while growing have softer tubers and are more prone to rot in storage. Also if the plants are dug before they have a chance to go dormant in the ground the tubers are soft and will shrivel or rot easier. To avoid these problems use low nitrogen fertilizers and allow your plants to sit in the ground for at least two weeks after they freeze or are cut down. I understand that this can be hard to do in some parts of the country. By doing these things we only lose around 1% of our tubers.
You do not need to divide your clumps before storing them but we advise it. If rot starts in the stem of a stored clump there is a chance of losing the whole clump. After dividing and marking the tubers. The cuts need to dry before storage. We store our tubers in plastic tubs, we use the shoe box size most often. You can purchase these boxes at most dollar stores for a dollar. A label is attached to the box with the name and identification number of the tubers that are stored inside. If we put more than one variety in the box we use plastic dividers. This way we can find each variety with ease. We use plastic to avoid fungal growth. In the past we used cardboard and had issues with fungus growing on it. As you can see in the photo the dividers we use are plastic coffee can lids cut to fit. We have used peatmoss and wood shavings in the past. With wood shavings we had some fungus problems. We liked the peatmoss but the tubers were stained dark and it became hard to find the eyes. We now use vermiculite it does not stain the tubers or promote fungal growth. Start by putting a layer of vermiculite in the bottom of the box then add the tubers. We lay the tubers in crisscrossed stacks. Next the vermiculite is added. Shaking the box some helps it fill in all the spaces. Put the lid on the box to help it retain moisture and store the tubers in a cool spot. The lids should not make an air tight seal. Our storage area is usually in the forty to fifty degree Fahrenheit range. Do not store your tubers in an area that freezes. When tubers freeze they turn to mush.
Check on the tubers every four to six weeks. If they are too wet leave the lid off until most of the moisture evaporates. If the tubers are starting to shrivel, mist them with water and replace the lid.