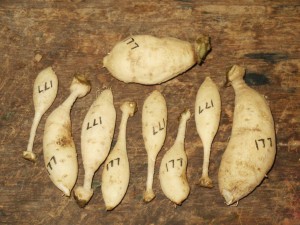 Many Growers divide dahlia roots differently. This is the way we do it at our farm and it works well for us.
Soon after digging your dahlia plant is the best time to divide the roots. The roots are still soft and easy to cut. The one drawback is that it is not as easy to see the “eyes” at this time but with practice and a bright working area it will become easier for you to find them.
Your roots should be cleaned and have the stocks removed before you begin to divide them. The picture below is a clump of roots from Snowbound an 8 to 10 inch, white informal decorative blooming dahlia. I chose this plant because the eyes are easy to see. They are the light spots at the end of the tuber next to the stock where next years growth will come from. Having the right tool for the right job always makes that job easier.
After years of dividing dahlia roots I have found that bonsai shears are almost always the best tool for cutting. They are small, so they are easy to maneuver around the root clump. They are made of hardened steel and have sharp tips that you can poke into tight areas. Some dahlia types are so tough that you will need hand pruning shears or a sharp utility knife at times to make cuts in them.
The first cut that I make is to remove the tuber from the clump, some times I will remove a few in one cut. In the photo below you can see two tubers being removed with the first cut. Notice the eyes. There are at least three of them that can be seen in this photo. After cutting all of the tubers away from the stock and the tubers without eyes have been discarded it is time to make the second cut. Dividing the tubers that came away from the clump together. To do this make your cut so that each tuber will have an eye attached to it. In the photo below you can see the shears placed between two eyes. This cut would be harder to make with hand pruning shears and not as safe to make with a knife.
Remember that not every tuber is going to have an eye on it. The last cuts that are made are the clean up cuts. Removing the hair roots and trimming the area that was cut away from the stock. In the past we used scissors to make these cuts, now we use the bonsai shears. They are very sharp and can make the finer cuts. When we are done cutting, we put a number on the tubers to identify them. Before dividing the next dahlia variety you should clean your cutting tools. This will help stop the spread of any disease that might be present in your dahlias.
To do this we use a solution of 10% bleach and 90% water. We alternate cutting tools allowing them to soak for awhile, then rinse them with water and dry them. After the dahlias are divided they are put on a rack to dry. Drying times vary from one to two days depending on the humidity in the shop.
When the cut areas on the tubers are dry to the touch they are ready to be put into storage.